Head into the accessible outback west of Cairns and discover the underground wonders of the former mining town of Chillagoe. Just 140 kilometres west of Mareeba along the Wheelbarrow Way, Chillagoe was once an ancient coral reef which has been transformed into spectacular limestone bluffs with a network of some 560 caves, while early volcanic activity has created rich marble and mineral deposits.

Wander the town to see the Railway Station, Bank Vault, Court House, Police Museum, Post Office and Post Office Hotel. The tall chimney on the edge of town is part of the former ore smelter which is now a drive-around museum with a viewing platform and story boards.

Join a guided tour of the spectacular caves with a National Parks ranger and learn more about this amazing underground ecosystem. Nearby short walking tracks include Balancing Rock and two Aboriginal rock art galleries. 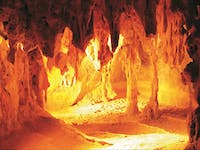